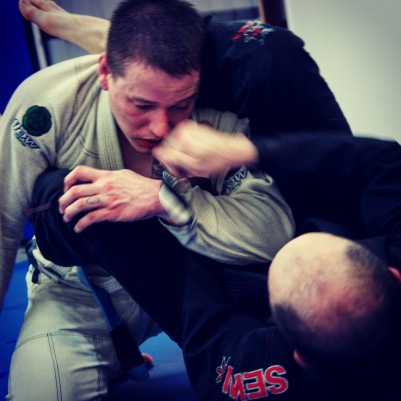 “A man of peace, confident in himself, dominates his adversary with his moral strength. Not with his physical power” – Helio Gracie

I learned the lesson of taking a punch early in life. Growing up, my friends and I purchased one set of boxing gloves, yes one set. We didn’t have much money. We would spar in the streets, each of us with one glove. The fights often ended on the  ground with the one free hand trying to grab and pull at what ever limb presented itself. I learned quickly that hanging in the “X”was the worst thing I could do. I needed to close the distance, get in close and end the fight. Inaction in any fight is a sure way to see you lose. Closing in to what seems will be the most painful of alternatives is what needs to be done. Its symbolic of what we need to do in our daily lives, getting close to the things that make us uncomfortable. Keep challenges close and close the distance.

In comes Jiu Jitsu, you can’t get much closer than this. It’s a fighting style which forces you to get comfortable close. It’s using leverage and strategy to wear out your opponent, hopefully getting him to tap out or pass out. Learning a new fighting style is my way of closing the distance and getting outside of my comfort zone. First thing you realize after “rolling” with your opponent is Jiu Jitsu hurts. Getting arm bared, choked or slowly smothered by another man can teach you valuable lessons. The words “yeah, don’t do that” pop into my head as soon as I see ceiling and feel my opponent get into a position to finish me off. Its a game of strategy, and when done correctly it can almost be therapeutic. 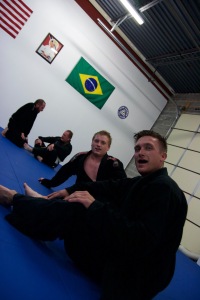 I’ve been often humbled in this venture. Often times finding myself out performed by men much smaller than me. My strength only goes so far. Technique and skill win the match. Being choked out by an opponent forces you to swallow your ego quick. It’s good to be humbled, and to be humbled often. Those that haven’t been humbled in a long time are often in a stagnant state of learning. If you’re not getting your ass kicked in the gym, in a match or in any challenge odds are you are not pushing yourself, you’ve gotten comfortable and comfort can be dangerous.

What you’ll often find in most martial artists is they’ve been humbled and understand that there is always someone faster, stronger and better. This drives the martial artist to improve and stay committed to their path. You rarely see a “cocky” fighter, at one point in a true fighters life, they’ve been humbled. This is what I’ve found in my new dojo,  a group of guys that aren’t trying to prove something to anyone but themselves and will help you in any way they can. Even if it means choking you out to teach you a valuable lesson, trust me you learn quick.

Everyday I train, I leave spent. All of my available energy is left on the mat. My body often aches as I hobble into my truck. There are many that will tell you “you’ll get injured doing that” and that may be true. But, what is the alternative? Injuries will heal, they will get better. What will not heal is a life lived in comfort due to fear. As I finish writing this I am nursing a knee injury that will take me out of the game for quite sometime. But, as soon as it heals I’ll be back in.


There is something in all men, the desire to have the ability to fight. Even the most passive of men have the internal switch. It’s programmed into us from years of fighting to survive and now in our civilized world we seek that challenge. It’s something that should be embraced to a point. With kids being slowly  deprived of physical expression and being taught not to fight back  we need this now more than ever. Our kids need to understand a physical confrontation and be comfortable in one, to defend themselves.

Nothing teaches you more about yourself than a fight. And, learning any form of fighting is good for us. It builds us, and it builds strong relationships with these we train with. Nothing like getting your ass kicked with your buddies. Just like my childhood friends and I. We were very close friends. But, we also enjoyed kicking the crap out of each other. I was never the best fighter, I honestly lost more fights than I won as a kid; however, I always learned something from each altercation. Conflict is a valuable element to understand in our current society. In an era where most altercations start and end on the internet we miss this, it becomes an abstract thought. So, close the distance. Expose yourself to the things that may feel uncomfortable or uneasy, cause odds are those are the things you need to work on. As I’ve heard several times “Die Living”.

2 thoughts on “Close The Distance”