How do you consume your social media? It’s often a question asked in this new world of the internet. A world where millions of interactions everyday are done miles apart. Images and comments are shared and called “engagement” or “interaction”. Well, I for one like my social media face to face, in the “real world”. Isn’t that the ultimate goal of social media? To bring people together on a higher level than mere “likes”? In comes Barbells and Beers an event that rips you out from behind your phone and into the clutches of old school non-algorithm interaction. The goal here is to meet like minded people from all walks of life, learn a new approach to training, break bread with these people and, of course, drink beer.

Beers and Iron for a good cause

This episode of Barbells and Beers is a bit different. We have teamed up with an organization called Sneaker Heartz. A non for profit which takes gently used shoes out from the dark pits of your closet and onto the feet of those who need them. Cameron DeHaven’s crew has been doing the heavy lifting for some time now and they have helped hundreds of people. So, what better way to kick off our 7th Barbells and Beers than by helping those who need it most.

This episode takes us to the Basement Gym in Saint Charles. Yes, its in a basement of sorts, but don’t worry this basement is rad. Upon entering the gym you instantly realize its not your average gym or basement. To the right your have what appears to be a traditional gym layout with machines, racks, plates and dumbbells; however, look closer and you see some pieces of iron that would never find its way into a big box mainstream gym. A monolift squat rack is perched nearby, giving you the sense that some heavy lifting takes place here. Chains are hung on one of the four racks, adding to the sense that we are not in Kansas anymore. And, bumper plates join the endless selection of iron plates racked. Where you by chance looking for 200 pound dumbbells? Well, they’ve got’ em and if you blow your back out trying to pick those bad boys up, just hobble down to Dr. Colton’s office for an adjustment. Yeah, there is a chiropractor here. The left side of the gym further disrupts the average “club” style gym with atlas stones, tractor tires, battle ropes, steel maces, a Yoke rack, and a damn keg! Interested in kettlebells? Not to worry, they’ve got them up to 100lbs. This gym isn’t messing around, like a twenty something millennial trying to sell you a time share at an all you can eat seafood buffet. No, this gym has something real to offer.

Why am I so sweaty?

We meet our trainer Ken, who has set up several stations. From tire flipping to pushing the yoke rack on there green runway, we’ve got our work cut out for us. The timer is set and we rock out 1 minute rounds at each of the seven stations. Sweat and heavy breathing ensue, as we work. A team lift is required for the rather heavy tractor tire plopped in the middle of the chaos. We have to earn that beer. The only reminders of the beer to come are the keg carries. After what felt like an hour, we finish our last station. High fives are thrown at one another as we begin to catch our breathes and wipe the sweat from our brow. 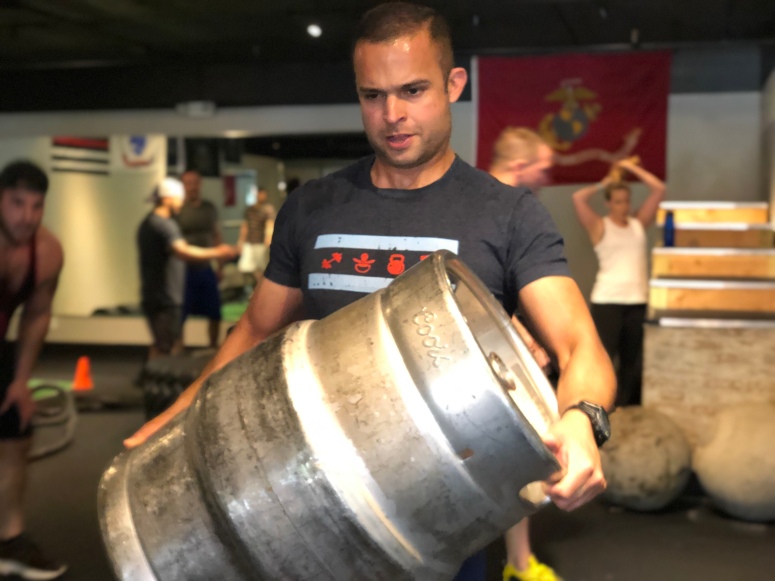 The cost for this workout was a donated pair of shoes for Sneaker heartz. While only one pair of shoes was required, many participants brought two, three, even four pairs for the cause. I realize that we have filled Cam’s box to the very top with shoes. Mission accomplished. Now, its time for beer!!!! 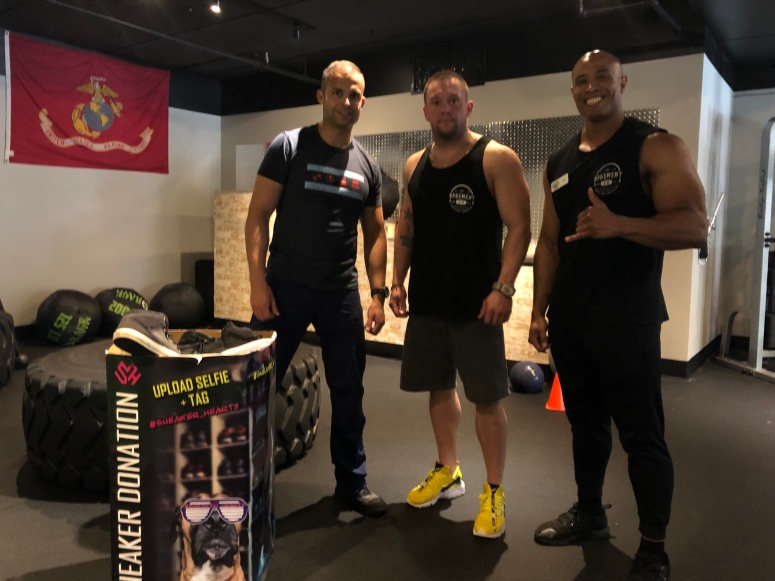 We roll over to the Filing Station, a staple of downtown Saint Charles eats. We sit ourselves in their patio. Many of us still a little sweaty, we take in the environment. The Filing Station has one of the best patios around. Surrounded by a stone wall with pillars, you can see all that downtown Saint Charles has to offer. I order a beer and smoked pulled pork sandwich. I devour both rather quickly. The food here is great and the service, even better. But, the best part of barbells and beers are the conversations. We had a great turnout at this event and a diverse collection of quite awesome human beings. From musicians to professional BMX racers, we had it all. Laughs and conversation carried the rest of the evening as beers ran dry and plates became empty. Little by little we started trickling back to home life. 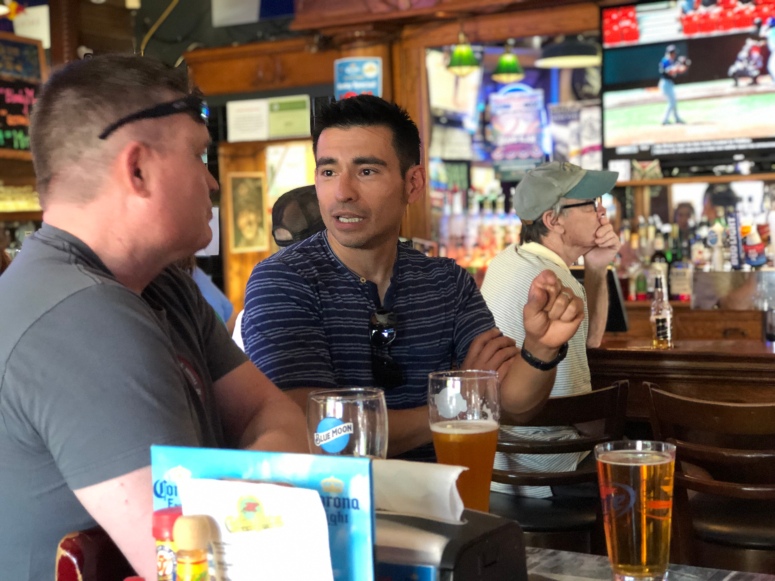 What will your impact be?

I often think about the impact I will have on this world. Will I leave it a little better than I found it? Will my sons grow up holding the same values I hope to pass on? We all have the ability to impact the world around us and we can chose whether that impact will be positive or negative. No matter how small we may feel or how finite our existence seems to us, we have the ability and the duty to make things a little better. I found that as big as the world may seem, every little action has the ability to change those around you. Look at Cam’s organization, a passion for sneakers sparked a passion for helping. One pair at a time his crew has put shoes on the feet of those who need them, giving them the ability to move, play and work. That action has a ripple effect that goes beyond what we can see. Every action counts.